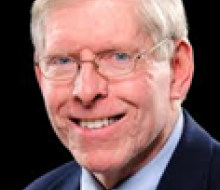 Dave deBronkart, widely known as “e-Patient Dave,” is a cancer patient and blogger who has become a noted activist for healthcare transformation through participatory medicine and personal health data rights. The term “e-Patient” was coined by “Doc Tom” Ferguson MD and is the subject of his seminal paper, “e-Patients: How They Can Help Us Heal Healthcare,” funded by Robert Wood Johnson’s Pioneer Portfolio.

Dave is the author of the new book Let Patients Help: A Patient Engagement Handbook.

In 2012 the National Library of Medicine’s History of Medicine Division announced that it’s capturing Dave’s blog into its archives.

A successful speaker in high tech before his illness, Dave is today the leading spokesman for patient engagement, attending over 180 conferences and policy meetings internationally in the past two years. He is a founder, board member and past co-chair of the Society for Participatory Medicine, formed by Ferguson’s followers after his death, and was one of the patient participants in the OpenNotes project.

In 2009 Dave’s blogging about health IT put him on the front page of the Boston Globe and thrust him into DC policy discussions about patient access to medical records under Meaningful Use. He’s appeared in Time, Wired, U.S. News, and the HealthLeaders cover story “Patient of the Future.” In 2009 HealthLeaders named him and his doctor to their annual list of “20 People Who Make Healthcare Better” for their role as founding co-chairs of the Society for Participatory Medicine, bringing official recognition to the importance of the e‑patient movement.

In 2011 his TEDx talk On.TED.com/Dave went viral globally, rising into the top half of the most-viewed TED talks of all time; volunteers have added subtitles in 26 languages. Its tagline is his appeal: “Let Patients Help.”